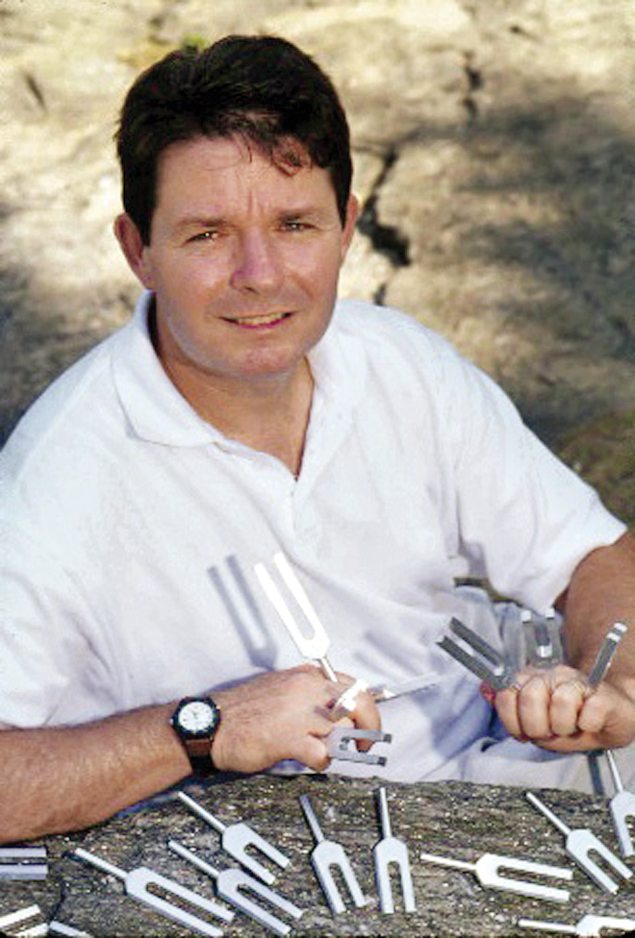 John Beaulieu, N.D., Ph.D., is one of the foremost philosophers and major innovators in the area of sound healing therapies.

A world-renowned speaker, composer, pianist, and naturopathic doctor, Dr. Beaulieu has pioneered a technique called BioSonic Repatterning™, a natural method of healing and consciousness development using tuning forks and other sound modalities based on the sonic ratios inherent in nature.

As the founder of BioSonic Enterprises, he has developed and distributed over 50 different sound healing-related products including tuning forks, instructional videos, audio programs, CDs and books. Dr. Beaulieu is the groundbreaking author of Music and Sound in the Healing Arts and the composer/producer of Calendula: A Suite for Pythagorean Tuning Forks, a CD designed to physically align your body and create a deep relaxed state of awareness.

He lectures and performs worldwide and conducts training seminars for practitioners in the healing arts.

John says “I discovered BioSonic Repatterning™ while sitting in an anechoic chamber at New York University. The chamber is a completely soundproof room that resembles a sensory deprivation chamber. I had read about the experiences of the composer-philosopher John Cage and decided to conduct a similar experiment. While in the chamber, Cage heard two sounds, one high-pitched and the other low-pitched. The engineer he was working with informed him that the high sound was his nervous system and the low sound was his blood circulating.

Dr. Beaulieu held the position Supervisor of Activity Therapy at Bellevue Psychiatric Hospital in New York City and Staff Therapist at Richmond State Psychiatric Hospital in Richmond, Indiana. He was responsible for the creative arts therapies, recreational therapies, and researching and developing community transition programs for adult psychiatric patients. He specialized in adolescent and child psychiatry.

After leaving hospital service, John worked as an Associate Professor at the City University of New York and Fareligh Dickenson University. He taught undergraduate and graduate courses in activity therapy, counseling, psychology, and research as well as serving as a graduate thesis advisor. He also worked as a mentor for Empire State College of New York, one of the first accredited universities without walls.

Artistically John studied formalized mathematical music composition with Innas Xenakis and experimental music composition with Franz Kamin and Concrete Poetry with Mary Ellen at Indiana University. In New York City, John performed with Jackson MacLow, John Cage, and Charlotte Morman and many others. His music compositions and poems have been performed around the world and are available through the medium of CD’s, books, and scores. John is a classically trained pianist and a student of the piano since he was four years old.

Dr. Beaulieu currently lives and practices in Stone Ridge, New York. He lives with his wife Thea and their twin sons, Danial and Lukas. He is a six-handicap golfer and at every opportunity loves to get away, relax, and play a good round of golf.

Did You Know You Can Tune Your Body? 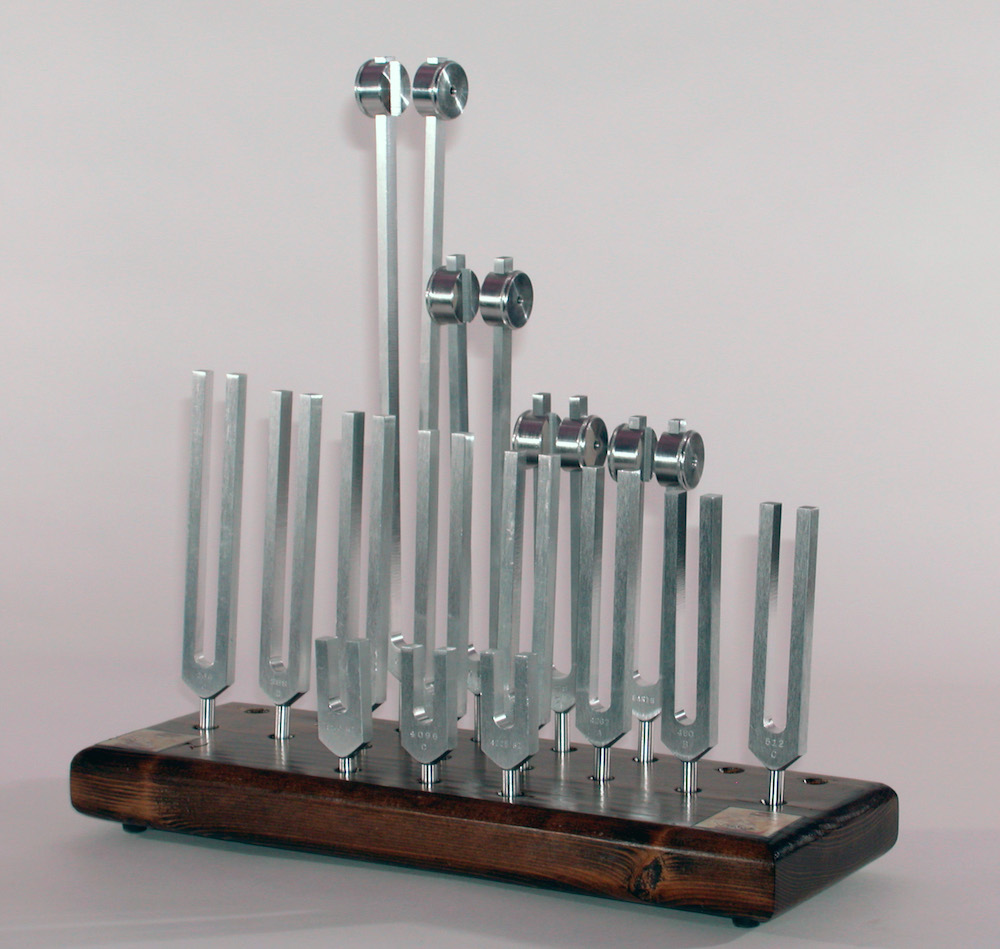 What is a Tuning fork? 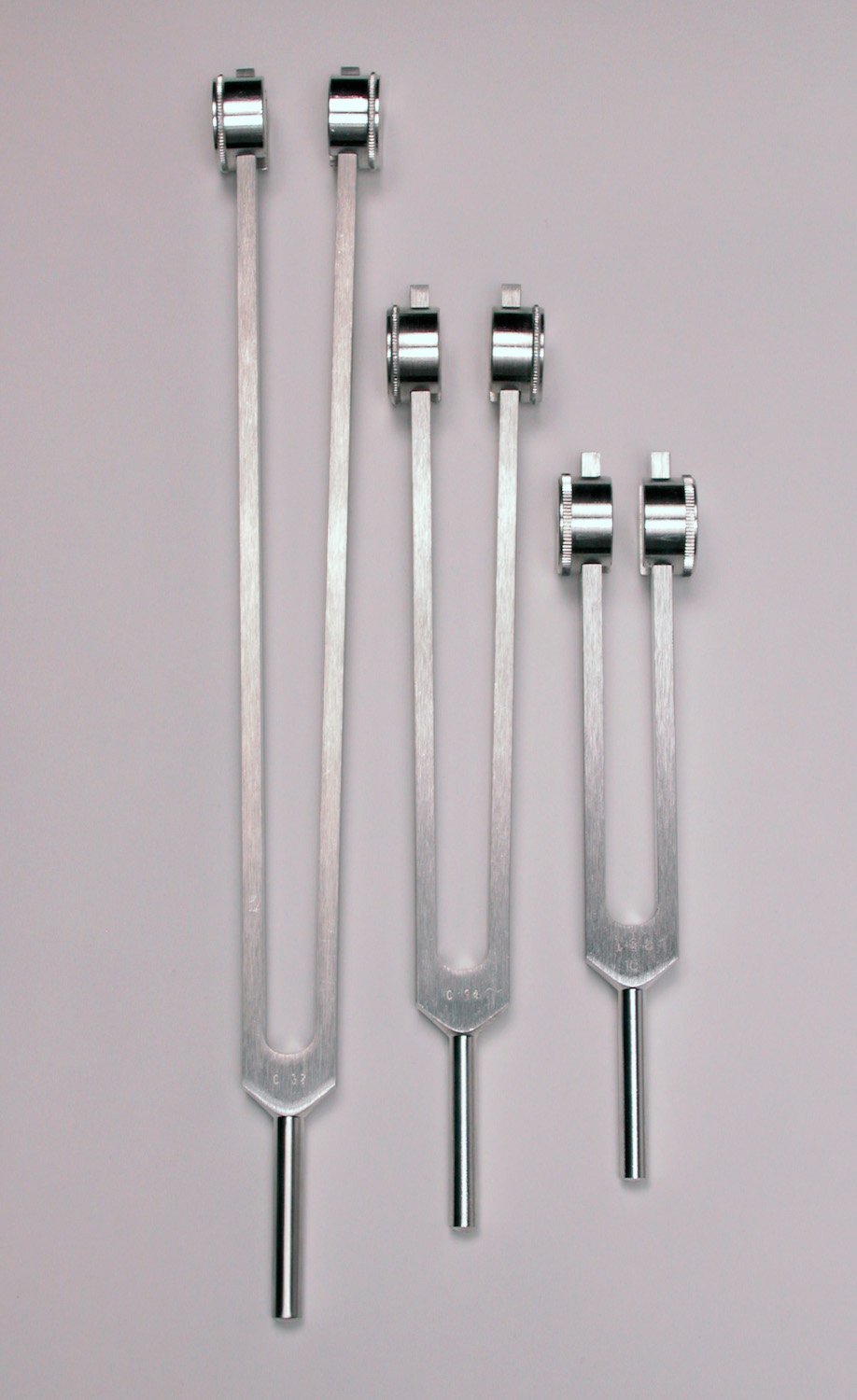 A tuning fork is an acoustic resonator in the form of a two-pronged fork with the prongs (tines) formed from a U-shaped bar of elastic metal (usually steel). It resonates at a specific constant pitch when set vibrating by striking it against a surface or with an object, and emits a pure musical tone after waiting a moment to allow some high overtones to die out. The pitch that a particular tuning fork generates depends on the length and mass of the two prongs. It is frequently used as a standard of pitch to tune musical instruments.

Why are so many people using our Tuning Forks?

• Provides instantaneous, deep state of relaxation
• Improves mental clarity and brain functioning
• Increases your level of physical energy and mental concentration
• Relieves stress by drawing your body into a centered space
• Develops and refines your sonic abilities
• Enhances massage, acupressure, dreamwork and meditation
• Brings your nervous system into balance
• Integrates left and right brain thought patterns
• Specially tuned to sacred proportions, you sit inside the space bringing two different sounds together making them one—and you feel unified, at peace, re-igniting the passion and power deep inside you. When you tap the tuning forks, you awaken the life energy of your cells and start them puffing, creating a centered, happy feeling inside. 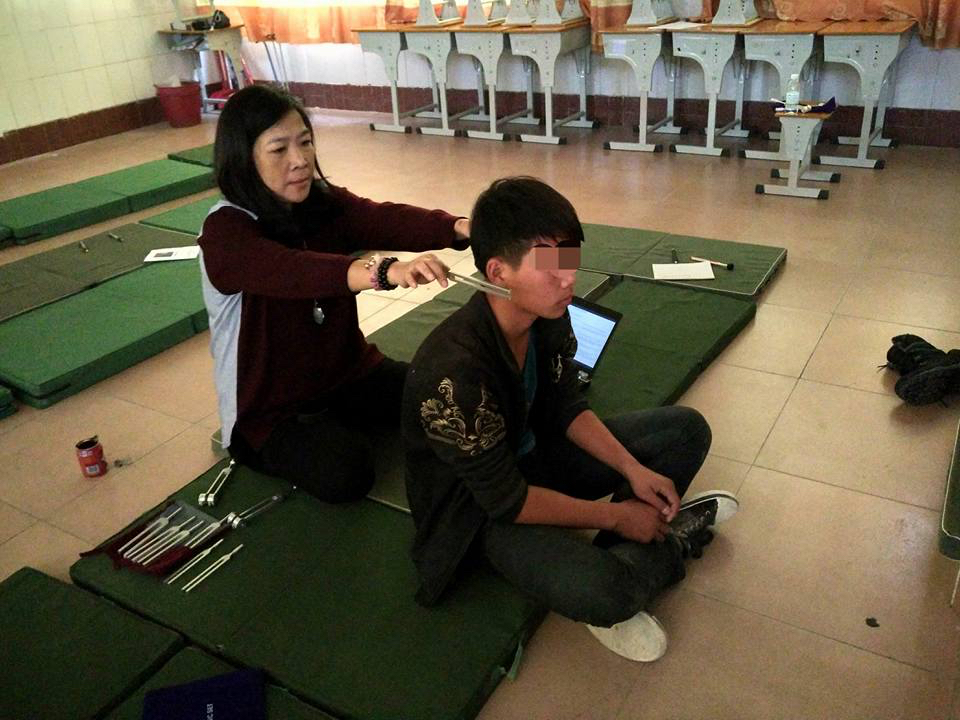 BioSonic’s precision-tested tuning forks are easy to learn, simple to use and the healing benefits are miraculous.
Everyday people and practitioners in the Healing Arts are using tuning forks to positively alter the body’s biochemistry. Sound enhances the healing effects of all energy therapy practices.
• Polarity therapy
• Reiki
• Massage
• Sports rehabilitation
• Yoga
• Hypnosis
• Psychotherapy
• Meditation
• And anyone interested in alternative healing modalities and pain management.

The best place to start is with two tuning forks, C and G, that together create the “perfect fifth”. Simply chime the forks together, place them on either side of your ears and hear the sound and vibrations. It’s as simple as that. You’ll also hear what’s known as overtones. If you have the complete set of eight tuning forks, all you need to do is lay out the tuning forks in order and count from one to eight. The number one fork is C256 and number eight is C512. The forks can be used over the body wherever you need awareness or healing. Just ensure you hold the tuning fork at the stem rather than the prong to allow the vibration to happen.

The sound of your nervous system is an indicator of your current internal state and carries a lot of information. If you’re very stressed, for example, it will sound more shrill and intense. If you’re relaxed, it will sound more flowing and soft. Once you become used to the sound of your nervous system, you can use tuning forks to help you retune your body. More advanced users are able to open the gateway to different states of consciousness. It’s a tool to help you get in touch with your inner landscape and live with more awareness and richness. If you have health issues, the application of tuning forks to pressure points stimulates the release of nitric oxide. Nitric oxide is made inside the vascular, nerve and immune cells and is rhythmically released into the surrounding tissues as a gas. It participates in the healthy functioning of all main organ systems and acts as a signaling molecule and attacking molecule neutralizing viruses, bacteria, and other free radicals. We’ve even tested it in laboratory experiments demonstrating the healing power of sound.

Tuning forks are heard and felt differently. On one level, it’s a chiming sound in your ears. Some people also feel vibrations in their bones and body. We encourage what’s known as “reception” creating a relaxed state so the sound of the tuning fork is better received. You can take deep breaths and calm yourself. If using the tuning forks as part of bodywork, the practitioner can hold the patient’s forehead in one hand and the back of the head in the other hand. For around three minutes, imagine energy pulsing between your hands. After this process, the tuning forks will work more powerfully. 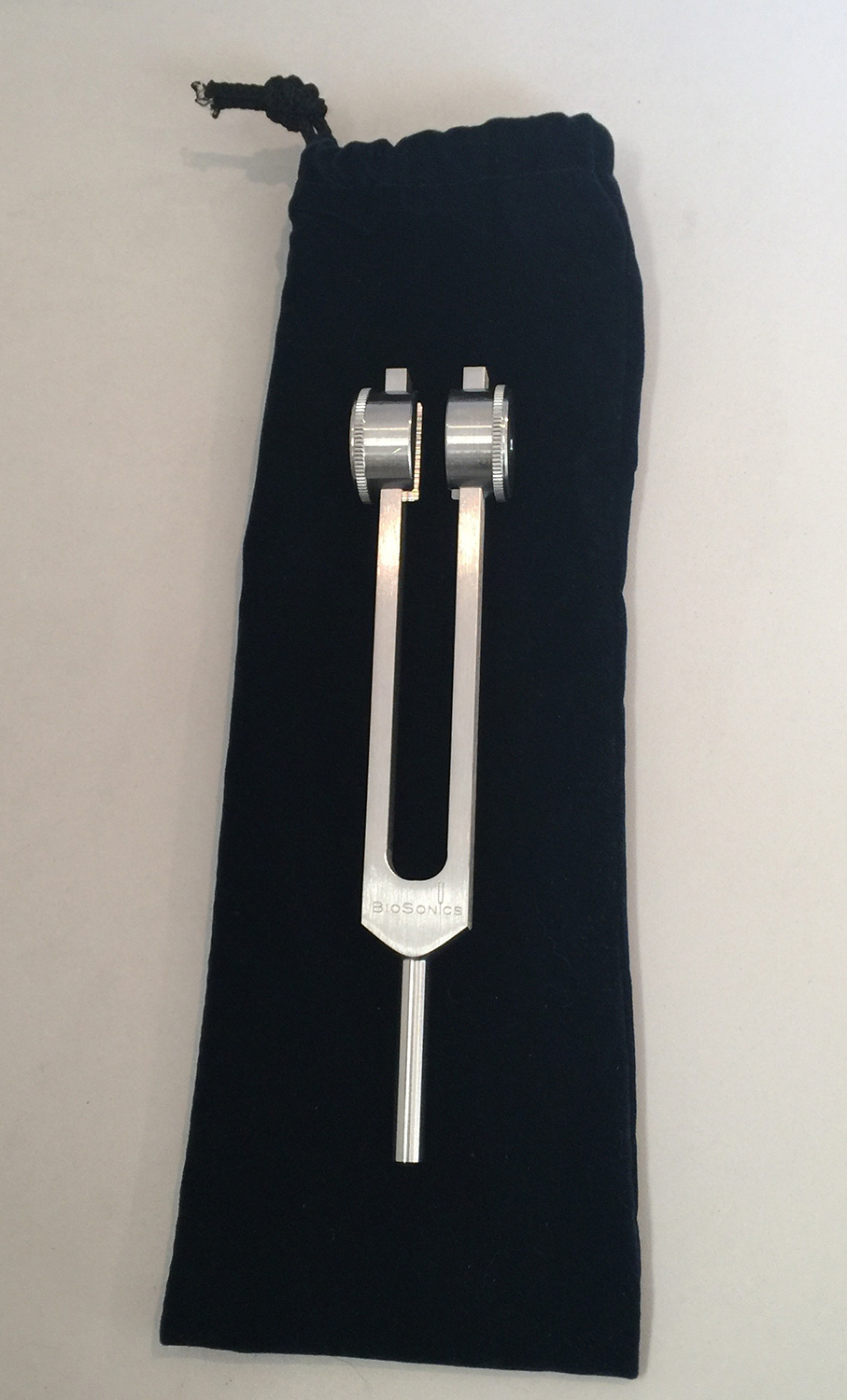 Achieve a state of deep relaxation in seconds with the primordial vibrations of “Om”. Physically tune your body to the Om vibration and enter a state of balanced wholeness ideal for healing and higher consciousness. Helps center the body and mind when placed on the rib heads, thoracic vertebra, sternum, sacrum and illiums. Helps meditators and yoga practitioners achieve desired states effortlessly.

A state of balanced wholeness
For deep meditation
Center the body and mind
The rishies or spiritual master of India believed that the musical tone sadja or sa, which means the father of all others, to be the musical sound which resonates with the never ending primordial vibration om. The rishies arrived at sa through deep meditation. To this day, Indian musicians approach tuning their instruments as a meditation to set the Spiritual tone for a whole concert. The effect of India’s meditative music is based on a musician’s ability to tune to sa.

The Swiss scientist Hans Cousto, author of the Cosmic Octave, discovered how to convert planetary cycles into musical pitches. Using his system the sa corresponds to the sound of one Earth year of the time it takes the earth to circle the Sun. To arrive at the frequency of 136.1 Hz, an earth year is reduced to a second (frequencies are measured in cycles per second). An earth year is 365.242 days and an earth day is 86,400 seconds. When the days are multiplies by seconds the answer will be 315,567,925.9747 seconds equal one earth year. To arrive at an audible sound, 315,567,925.9747 seconds are divided into one (year) and then raised 32 octaves. The result will be the audible tone of answer 32 times the result will be 136.1 Hz. The cosmic note OM. 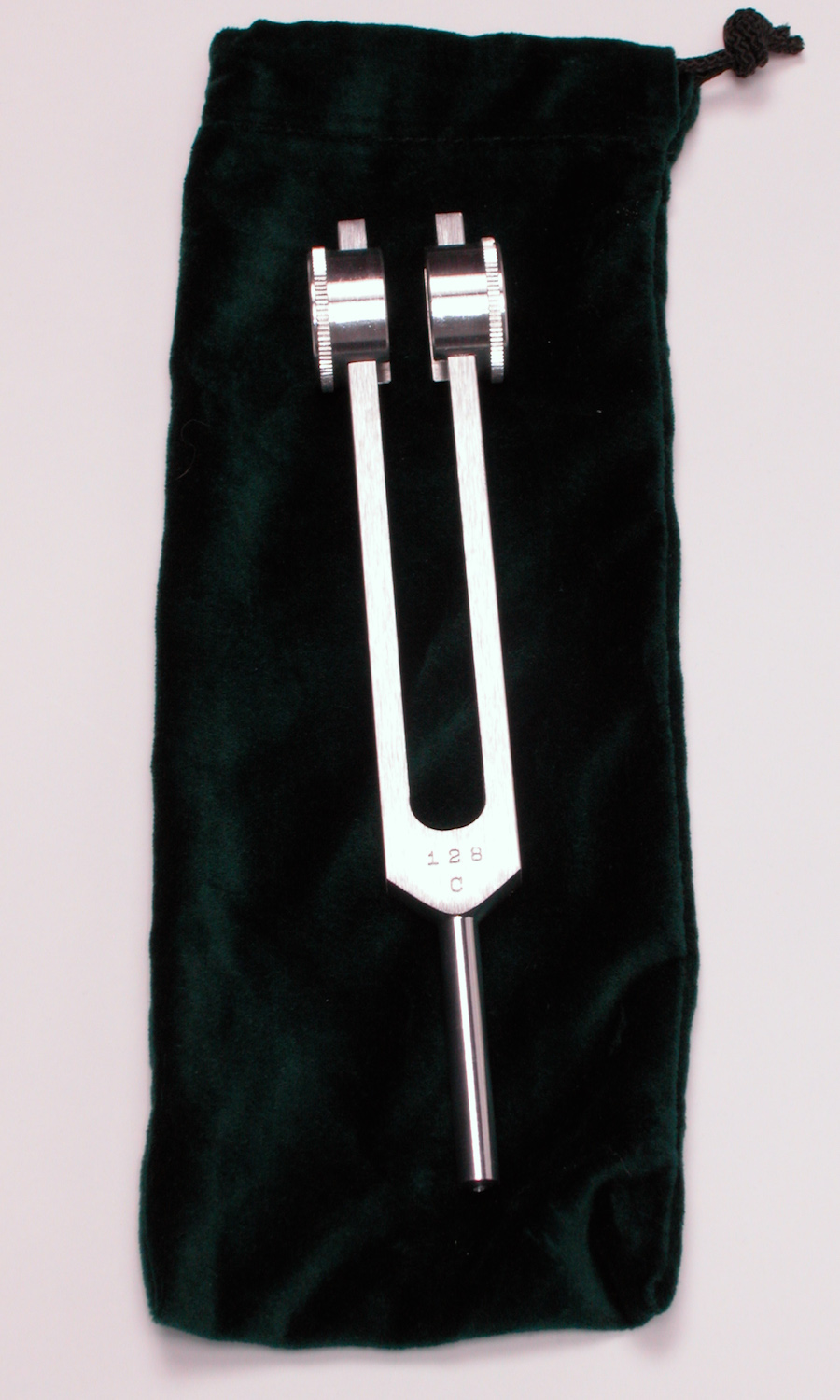 Directly used on the body to help align your physical structure, the Otto Tuner resonates the bones, stimulates the nerves and releases tension from the body. Vibrating your bones with deep earth tones, the Otto Tuner brings a sense of deep relaxation and soothing peace. It relieves muscle tension, spasms, pain, and improves circulation by relaxing constricting muscle tissue and causing increased blood flow.

The Otto tuners are used for relaxation, the sound vibrates into the bones for relaxation. The Otto Tuners are tuned to the frequencies of 32cps, 64cps and 128cps. They vibrate at a low pitch and due to their weighted ends the sound lasts longer than that of regular tuning forks. Their frequencies are based on an 8 cps fundamental tone raised in octaves (i.e. 8 cps, 16 cps, 32 cps, 64 cps, 128 cps.) The 8 cps fundamental, which based on the pulsation of the planet earth, is the generating tone for all our tuning forks.

The 128 Otto Tuner is especially effective when placed on the rib heads, thorasic vertebra, sternum and illiums. Two Otto Tuners tapped gently on the knees and held to the ears create a beautiful sustained low tone, which is excellent for grounding and relaxation. 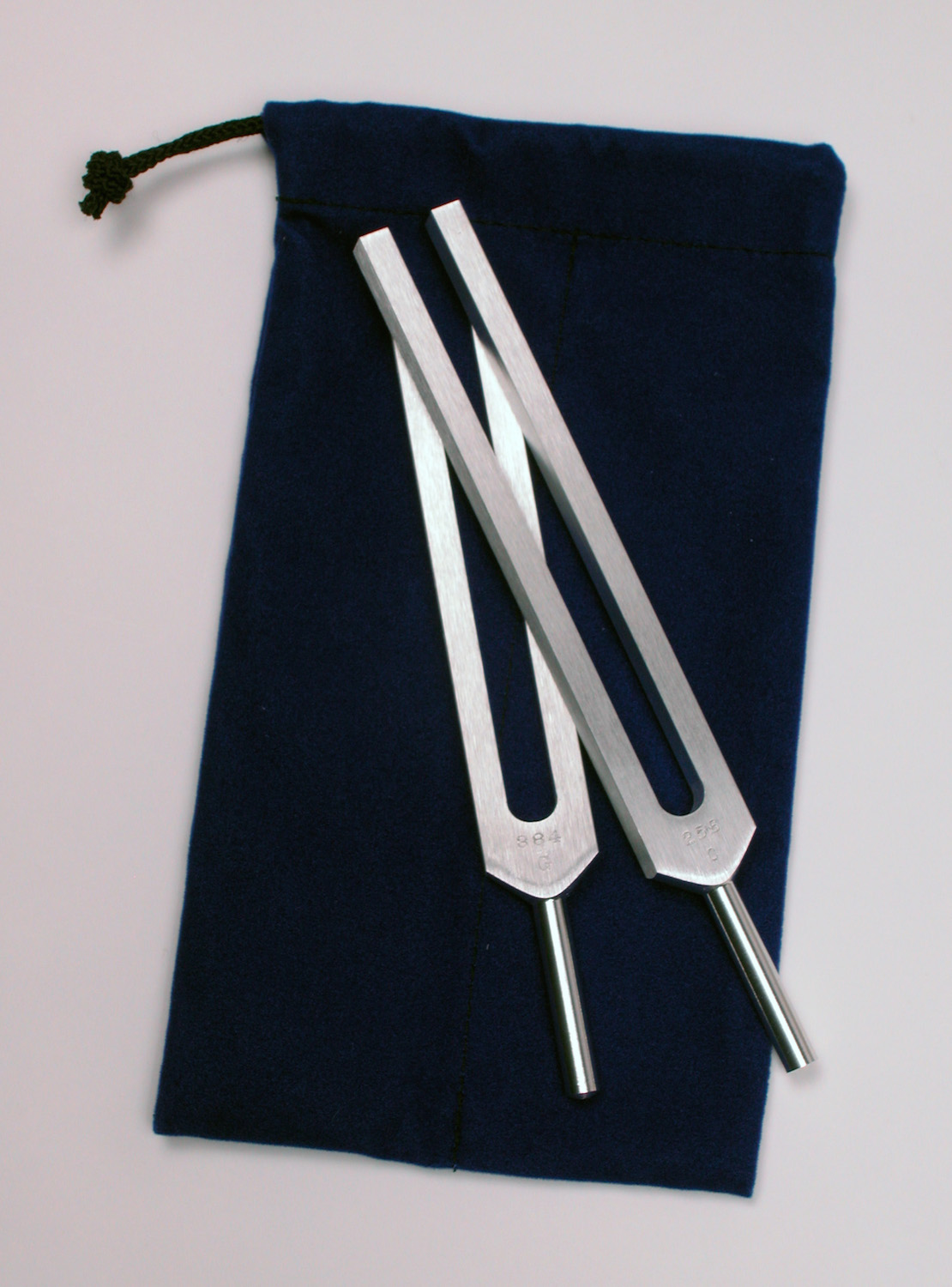 The Body Tuners are the ideal beginner as they are the most powerful tuning fork combination. The C and G tuners create a “perfect fifth” and open the gateway for healing and higher consciousness. Listening to these two different tones, your body makes one tone, bringing your whole nervous system to balance and integrating your mind and body. Within 30 seconds (the same amount of time it takes to stretch a muscle), you can achieve a state of unification and deep relaxation, which might take you 45 minutes to reach through meditation. 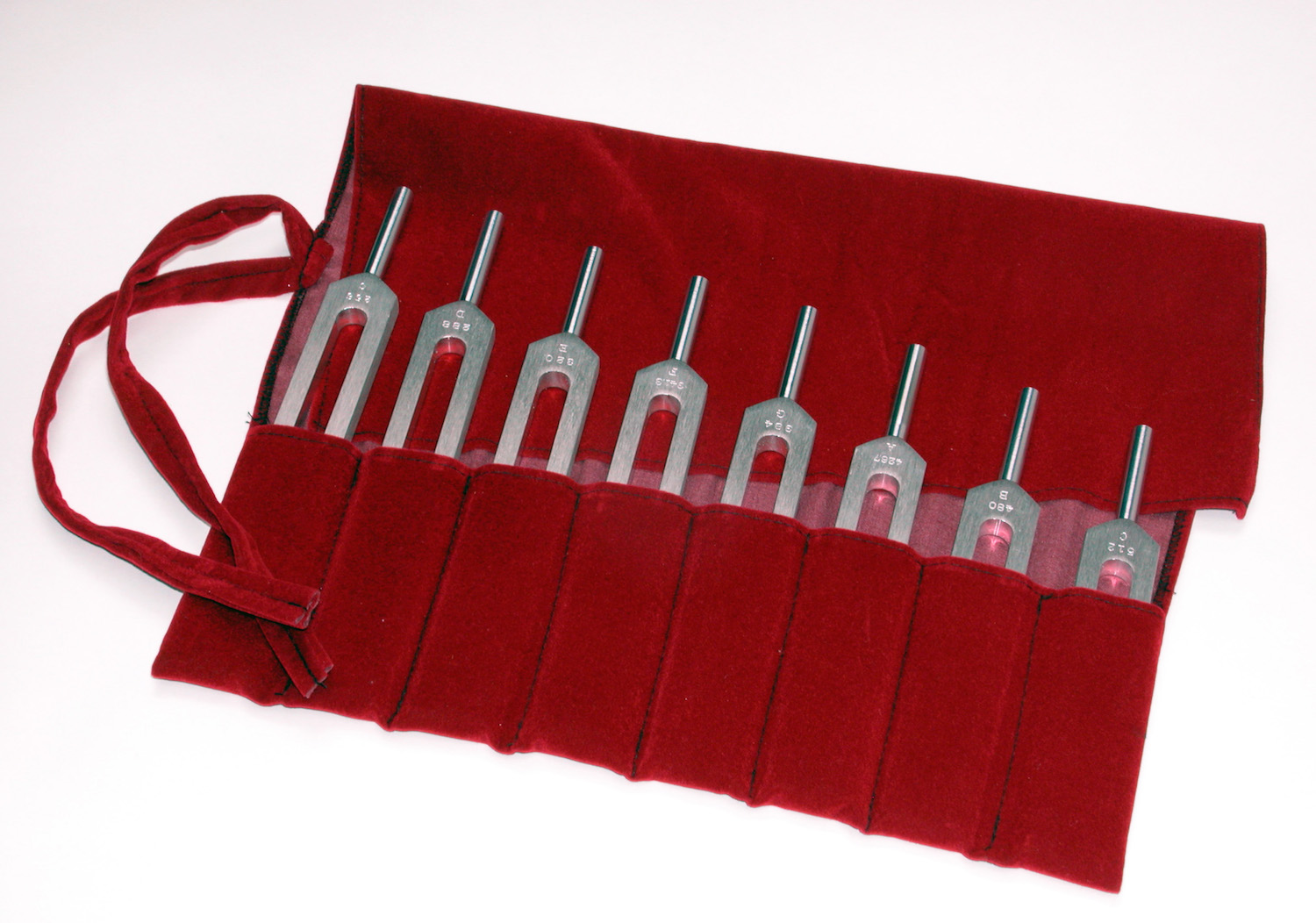 With this set of eight tuners, you achieve fast, instantaneous relaxation as well as develop and refine your sonic abilities. The Solar Harmonic Spectrum helps you re-proportions your body through a process of cellular memory based on the natural ratios of the tuning forks. 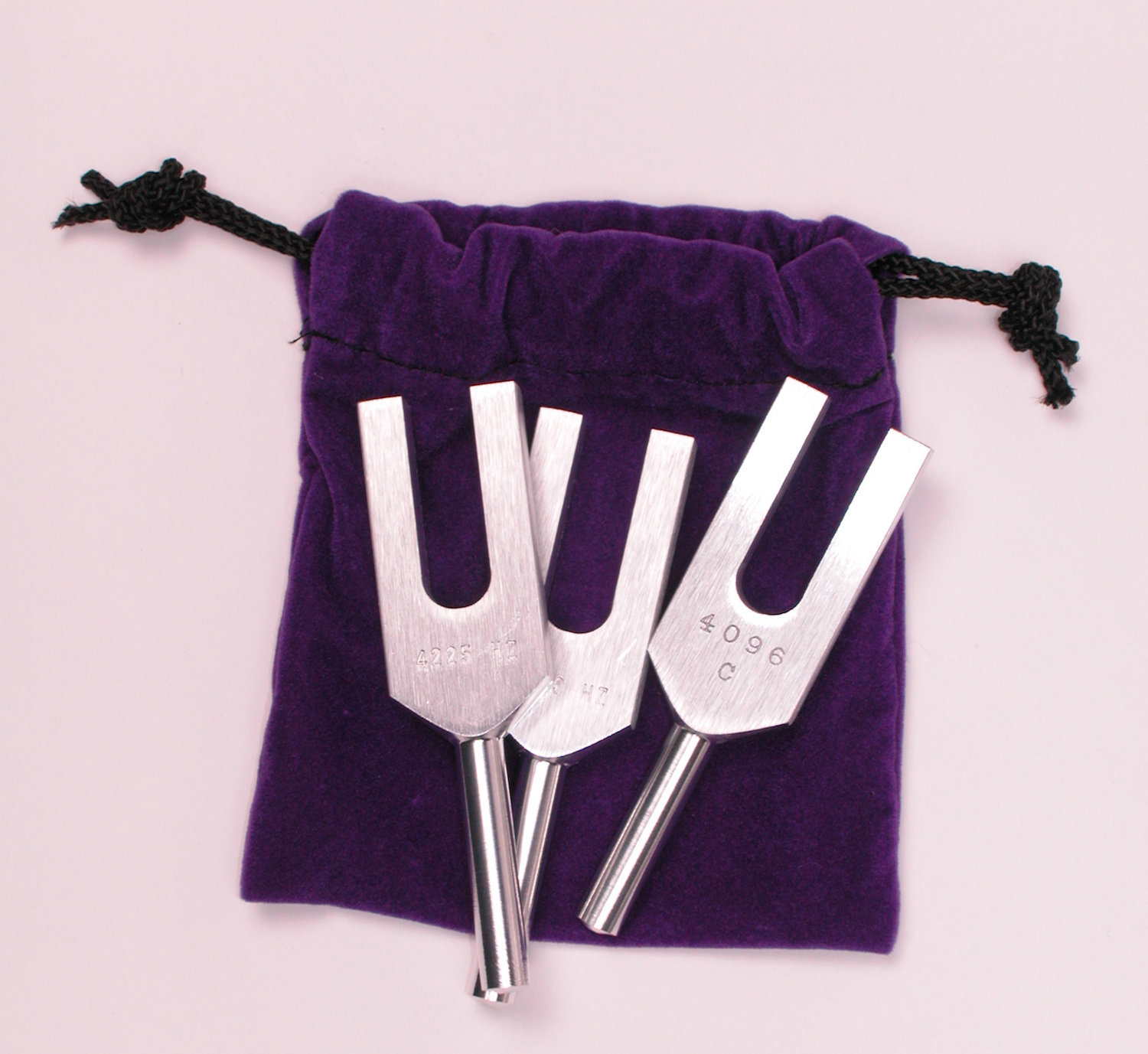 Based on the ninth octave of the overtone series, the Angel Tuners open the passageway to angelic kingdoms. By vibrating your cranial bones, the Angel Tuner opens the gateway for spiritual insights and experiences. This tuner enhances your connection to universal energy for manifesting inspiration and a meditative state, as well as connections with higher powers, visions, and creative expression. 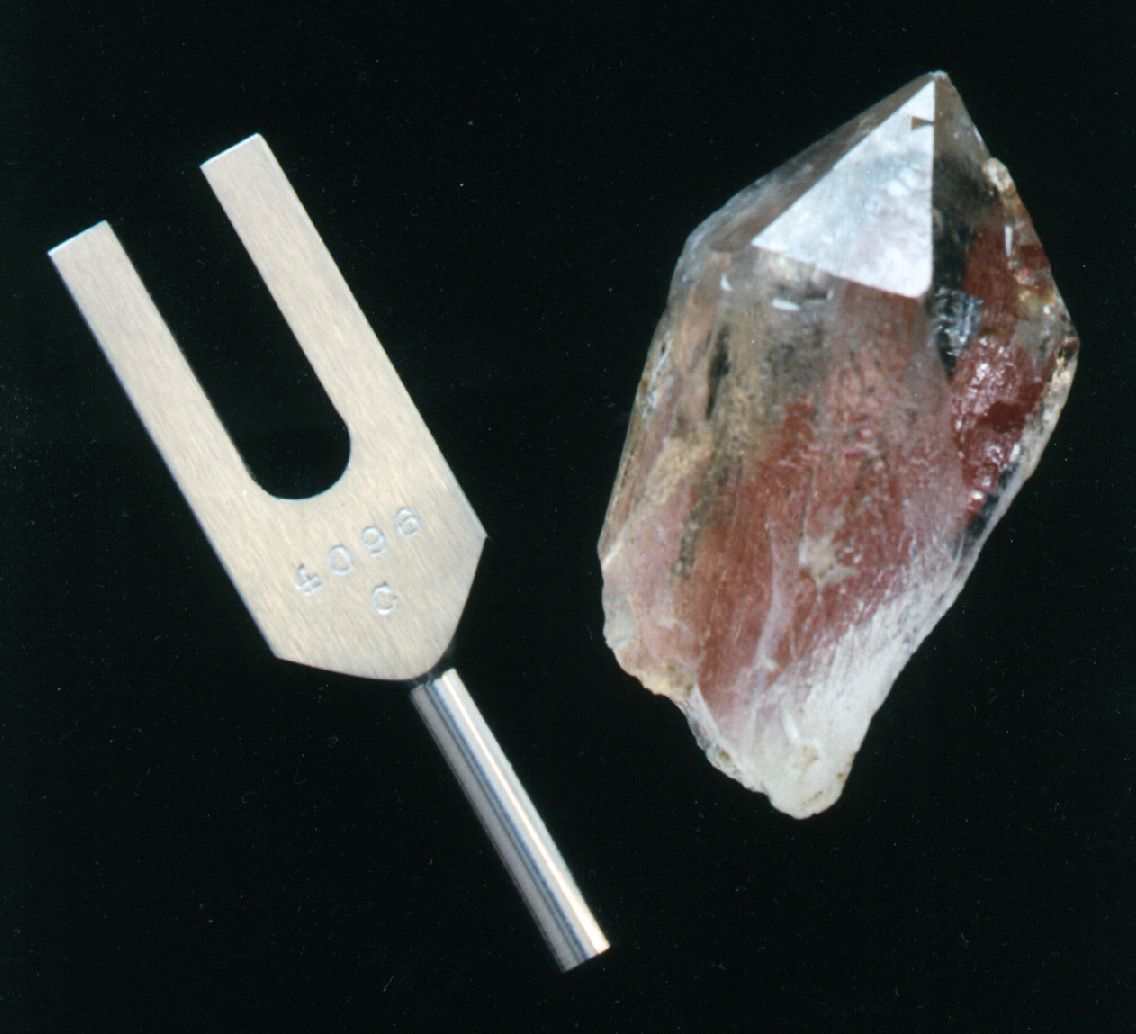 With a frequency tuned to the pulsation of the Earth, the Crystal Tuner amplifies the healing power of crystals through sonic vibration. Enhancing a crystal’s ability for light conduction and powerful sound healing, when tapped on a crystal, this tuning fork forms a bridge between Heaven and Earth. When you lightly hold the Crystal and Crystal Tuning Fork, a pulsating wave moving between the tuning fork and crystal may be felt.